Book review: The Beatles - Here, There and Everywhere

Slipping in just under the wire for the 50 years-ago celebration of the Beatles invasion of the United States, this hefty volume authored by Nancy J. Hajeski is the most thorough, photo-festooned overview of the Fabs career published this year.

Nostalgic Baby Boomers will enjoy getting lost in the pictures, while newcomers can enjoy a visual history of the band along with useful information. While the main text charts the Beatles' progress, sidebar articles detail the group's discography, providing trivia, track listings and release dates of each album. There are also separate articles on the Beatles' wives and girlfriends, their homes and instruments, as well as a short piece about other Apple Records recording stars. 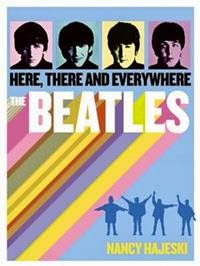 This is more of a browsing than reading book and it's nice to see lots of somewhat rare photos. It's not all the same pics you've seen a billion times before. Many photos are in color and the print quality of the entire book is very good.

The text is, for the most part, solid and well-researched. Hajeski doesn't attribute many of her statements, though there is a decent bibliography in the back. She focuses on the basic facts of the Beatles' developing career - there's not much in the way of insight or analysis, which is acceptable for a book of this nature. However, a few things did raise eyebrows.

Hajeski's portrayal of Brian Epstein is odd. She mentions him cheating the band and his "sticky fingers." Epstein was vital to the band's success and beloved by its members. Though John Lennon has some harsh things to say about Brian (and everybody and everything else) following the breakup of the band, the general line from the Beatles camp is that, yes, Brian made some naive and bad business decisions that hurt the group's fortunes, but this was due to ignorance, not malice. It's almost as if Hajeski has confused Epstein with Allen Klein.

The details about the Beatles booking on "The Ed Sullivan Show" are also a bit confused, implying that Walter Cronkite had a role in brokering he deal, which isn't true. CBS News did broadcast an early segment about the band, but Cronkite didn't act as the reporter on it and hadn't met the band as this book suggests.

These are small quibbles about an otherwise nicely produced book. Serious Beatles fans probably are at their threshold for this type of general interest nostalgia, but if you have friends or family interested in learning more about the band, or need a companion to their Beatles CDs, this one makes for a nice gift.