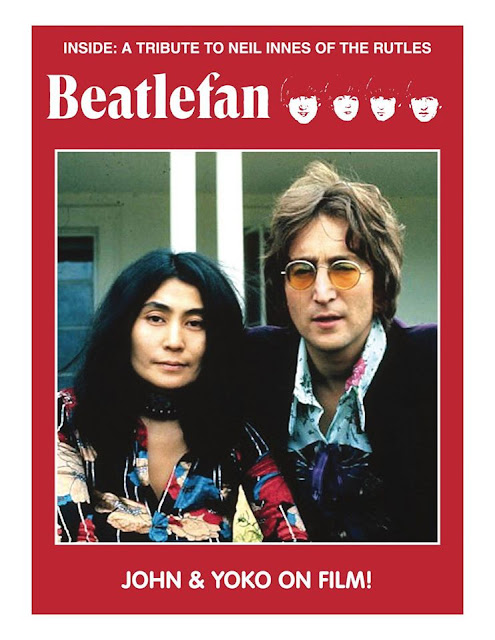 The newest issue of Beatlefan includes part one of "The Beatles Necrology," a listing of people in the Beatles' lives who are now gone, written by yours truly. The idea was suggested to Publisher Bill King by Beatles historian Mark Lewisohn, who helped crowdsource the piece, along with Bill Harry of Merseybeat fame, and most of Beatlefan's editorial roster! Thanks, all, for your help!

You can order a copy here.


Beatlefan #242 spotlights the film work of John Lennon and Yoko Ono, as Ken Sharp chats with director Michael Epstein of the “Lennon NYC” and “Above Us Only Sky” documentaries, film editor Jack Reilly begins a two-part memoir on working with John & Yoko on their short art films, and Brad Hundt assesses whether those films really rise to the level of “art.” Also in this issue, Bruce Spizer looks back 50 years to when fans were surprised by “The Beatles Again,” Bill King takes a look at what The Beatles were saying about their future just before and after the breakup, Al Sussman pays tribute to the late Neil Innes of the Rutles, and John Firehammer begins our“Beatles Necrology” of members of the Fabs’ world who no longer are with us. Plus, Chip Madinger explores the mystery track “Rock Peace,” and Tim Hatfield posits that the “Abbey Road” medley was a perfect summation of The Beatles. And, of course, we have the latest news (including word of the forthcoming “Let It Be” anniversary releases), as well as reviews of other recent recordings and books and videos.