"Lennon vs. McCartney: The Beatles, Inter-band Relationships and the Hidden Messages to Each Other in Their Song Lyrics," by Adam Thomas is available now via Lulu.


A stunning new book showing how the Beatles’ song lyrics contain secret conversations between John Lennon and Paul McCartney. Varying between strong affection and outright hostility, these hidden messages clearly mirror the fluctuations the two Beatles were experiencing in their personal relationship at the time. The Beatles themselves have made only fleeting references to this troubled phase. Paul McCartney acknowledges what he calls the “song wars” period, confirming that, at the time, “I was really writing a lot of songs to John.” John Lennon meanwhile played down the negative tone of his messages saying “I’m entitled to call Paul what I want and vice versa. It’s in our family” 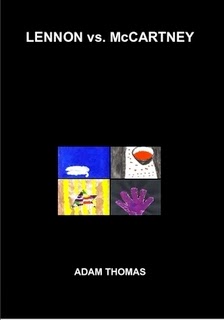